(Source Joinup) Germany has decided to develop an application profile of ISA²’s DCAT-AP, under the name DCAT-AP.DE, for using it as its national metadata standard for datasets published on German data portals.

On 21 November 2016, the steering committee of GovData, the German data portal, selected DCAT Application Profile (DCAT-AP) as the basis for specifying DCAT-AP.DE, the metadata standard to be implemented at the national scale across all data portals in the country. This decision was the result of a long journey towards the establishment of a single metadata structure for Open Government Data which started in 2013 in Germany.

Based on analysis and surveys as well as on a public consultation, the standardisation path chosen by the steering committee led them to the decision of developing a specification fully-compliant with the DCAT-AP. This will ensure direct interoperability with the EU standards. Therefore, it will become easier for the various governmental bodies to exchange information and develop interoperable systems. Increasing interoperability is required in order to support the creation of value-added services and tools based on Open Government Data.

As explained by GovData in the Open Government Data Standard 2.0, DCAT-AP.DE will enable the interconnection and the exchange of metadata between German data portals and GovData, following the federated architecture depicted in the figure below: 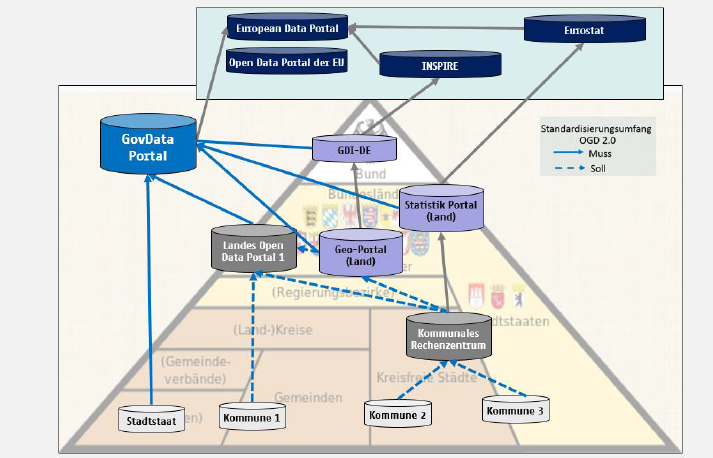 According to the European Data Portal, the compliance of DCAT-AP.DE with international formats will “enable companies such as the ones listed at datenwirken.de to re-use the data easily”.

A final feedback report summarising the public review period of the OGD 2.0 Standard, opened on Joinup for the last couple of months, will be soon released. It will be followed by the publication of the DCAT-AP.DE in the first quarter of 2017. Later in 2017, DCAT-AP.DE will be implemented in GovData and other data portals in Germany. A transition period during which GovData is going to use both the metadata model OGD 1.1 and the new model is planned. If the implementation of DCAT-AP.DE works as expected throughout the trial period, it will be put into force as the German metadata standard in 2018.